Go for it now. The future is promised to no one (Wayne Dyer).

Two and half years ago, a group of researchers embarked on an initiative called ‘Climate Change Communication and Social Learning‘ (later dubbed ‘CCSL’). Since then, the group has grown and the initiative has moved forward in leaps and bounds. Anno 2015, social learning for agriculture and food security has to begin scaling up and out to influence real practices and policies, or wane in the department of ‘lost and found development (research) efforts’…

This is one of the main conclusions of the recent CCSL team meeting (15-17 December 2014 in Kenya). It is not the only interesting and important conclusion we came to. Over three days, team members:

The CCSL group has been developed thanks to seed funding and ongoing support from the CGIAR Research Program  (CRP) on climate change, agriculture and food security (CCAFS). It has been followed on this space, from the foundational workshop, to team meetings or other meetings, or even the key outputs developed. And it connects very well with various strands of the work done by the International Livestock Research Institute (see presentation below):

However, at the turn of 2014, CCAFS – like other CRPs – has an unclear future and funding. This was the main driver behind our re-imagining the future of this CCSL initiative.

A big, bold future, connecting energies and capacities around principles of action and learning

The vision of the group for 2025 is that: “vulnerable communities draw on collective, transformative learning capacities to respond to the wicked problem of climate change in ways that enhance their resilience and reduce their overall poverty – through the transformation of norms within the research for development community and within national policy environments“.

The vision further hopes that “actors and organizations from research, policy and practice apply learning-based strategies and adaptive management to continuously reflect and improve upon their practice, working in linked-up ways and drawing on knowledge from across scales and contexts“.

The bottom line is that social learning is only a means to a food secure, climate-smart future that transcends individuals who ever adapt and evolve through collective learning and action drawing from various knowledge sources.

The term ‘social learning’, however, may be a barrier to further progress. The brief of the team in 2015 and beyond is therefore to explore what related concepts and terms other organizations and networks are using, use their language to bridge the gap, and explore opportunities to collaborate around the ultimate goals of CCSL and these other ‘communities’. The idea of a manifesto was brushed over, with the ambition to clearly explain what the principles of social learning are, to focus on these rather than the term social learning itself.

Luckily, a number of useful resources (such as the framework and toolkit) have been developed by the CCSL team to move this work forward.

This vision of the future for 2025 has to first apply to a number of important development actors by 2018: a couple of funding agencies, some governmental agencies, a couple of large international organizations, a handful of communities on the ground and also specifically a couple of development initiatives (although the case of ‘civic-driven initiatives’ was also questioned. Failing to effect change among these actors would mean that social learning has not delivered on its promises and may be doomed – under this CCSL avatar. 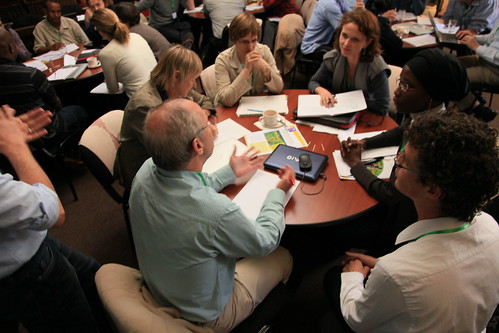 If CCSL, on the other hand, wants to play a role in bringing together the key actors of the social learning arena (and its ‘happy families’), it will have to be very active on various fronts. Some of the steps that the team specified were:

Opening the space for learning and change

The main thrust of CCSL work is currently happening through the CCSL sandbox, which consists of a publicly accessible wiki and a closed Yammer network (pending on membership) for interactions among interested parties.

The team felt that this special space has to open up and connect other actors quite quickly. The platforms currently used will be reviewed in 2015 and perhaps complemented by a more open platform with greater profiling options (such as a LinkedIn group) to engage more widely and more deeply with all the actors that could find CCSL valuable.

Two other critical steps in this ‘CCSL opening up’ direction that the group identified were to:

The year 2015 appears very busy already and promises to be dramatic on the social learning front. In one year from now, as good learning practice, the time of the ‘after action review‘ will tell whether in 2016 CCSL holds or folds.

Read notes from the meeting

See pictures from the meeting