The development of new CGIAR research program (CRPs) proposals for a second to start in 2017 is currently looking into developing country collaboration and site integration processes that guarantee all CGIAR centres are collaborating among themselves and with other critical national partners as much as possible in 20 focus countries. Communication and engagement are critical to such processes and a communication team is well placed to help there.

In Ethiopia – one of the six priority site integration countries in that list of 20 – the ILRI Communication and Knowledge Management (CKM) team has been strongly involved in this process.

Before site integration even became an issue for the second wave of CRPs, the CGIAR system in Ethiopia organised, under the leadership of the International Livestock Research Institute (ILRI), a meeting with the national agricultural research system in December 2014. This initial consultation, facilitated by a CKM staff, helped identify a number of areas of cooperation.

When country collaboration (initially titled ‘site integration’) became an objective as part of the submission of CRP proposals, the CGIAR centres could resume this process, on the way to a national consultation process that was to be echoed in the 20 countries. 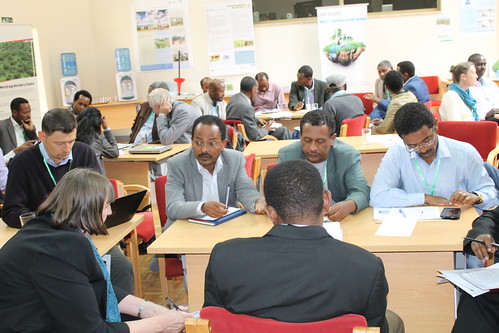 CKM staff contributed to designing the first and largest national consultation meeting for Ethiopia in December 2015 and helped turn this challenging event into a useful exercise in aligning around national priorities and fostering a spirit of collaboration across the board.

CKM support also included the coordination of a marketplace helping all CGIAR centres highlight their work in Ethiopia. Meeting notes and the official meeting report were recorded by CKM staff and colleagues.

Following that first consultation meeting, a few other meetings took place. They were organised by individual CRPs (such as the Livestock CRP) or as follow-up meeting among CGIAR centres based in Ethiopia. Both of these meetings were  designed and facilitated by CKM staff in Ethiopa. CKM process design and facilitation support also extended to Kenya where a livestock CRP consultation mirrored the Ethiopia consultation meeting. Beyond these face to face meetings, an online space was set up to pose specific questions on the development of a Livestock CRP proposal.

In 2016, more of these meetings and consultations are likely to take place and ILRI’s CKM team is well-placed to support the overall engagement process. Such processes demonstrate the value of bringing in CKM; ideally they form the start of longer-term and sustained inputs from ‘comms and KM’, as illustrated by positive experiences of the Africa RISING project.

Read results from the first national consultation process from December 2015 – including the official report.