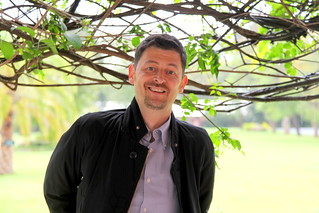 Before his appointment, Stapleton spent more than 15 years working for various international and national NGOs in policy and communications roles. Between 2004 and 2015, he oversaw the strategic development of communications at the Jesuit Refugee Service (JRS). In addition to managing relations with the media and taking a hands-on approach to the development, design, editing, translation and publication of electronic content on the JRS multilingual websites and social media platforms,

Stapleton also taught human rights at the Rome Campus of the Loyola University Chicago and was actively involved in advocacy networks on child soldiers, migrant detention and landmines. He also worked for the Irish Refugee Council as the policy officer for three years until 2003, where he was responsible for the development of policy and research papers, and relations with the media.

During the 1990s Stapleton worked for the African development NGO Environnement Développement Action dans le Tiers Monde, Amnesty International and the Institute of International and European Affairs. He has a bachelors degree in economics and mathematics, a masters in social policy from the National University of Ireland Maynooth and a certificate in managing non-profit organizations. He is an Irish citizen and is fluent in French, Italian and Spanish.