The International Livestock Research Institute (ILRI) has recognised this need and has been investing in this skill. Since 2007, ILRI has been inviting Sam Kaner and other members of his company ‘Community at work’ to train a number of ILRI staff members.

Since early 2015, these efforts have redoubled with a total of 6 training sessions provided between February 2015 and March 2016. A total of around 100 ILRI staff members have been trained in such a fashion and the demand for this training is not weakening.

Why is ILRI investing in group facilitation skills from outside in?

What training participants come away from the course with include:

And so this course is actually not really meant just for people who end up designing and/or facilitating meetings and large events, but also any leader that has to understand participatory decision-making, as well as any other worker that needs to work with other people from different backgrounds.

In the complex world of agricultural research for development that ILRI operates in, it is no wonder that this training course is indeed recognised as a ‘game changer’ by a large number of participants.

This is one of two training courses that transformed me and really contributed to my growth (Flavio Sacchini, ILRI)

And retrospectively it is no surprise that ILRI is investing in this set of skills and understandings in order to obtain the work it aspires to achieve.

How is ILRI investing in group facilitation skills for the future, from inside out?

In addition to the six training courses that have taken place since early 2015, ILRI and Community at Work initiated a process of ‘training the trainer’ whereby one of the ILRI facilitators from the communication and knowledge management (CKM) unit is being trained to become the in-house trainer on group facilitation skills ‘a la Community at Work’.

This initiative is not only economic in the longer run, but also ensures that the community of group facilitation skills trainees remains close to one another and cultivates the skills that have been acquired across three days of training.

A virtual network -aspiring to become a genuine community of practice- was set up in November 2015 for all past trainees. This network has its dedicated resource page and is hosting bimonthly virtual chats to answer anyone’s question or aspiration regarding putting their skills to use. In the future, face-to-face sessions are also expected to take place.

2016 may see other groups of trainees join this group and strengthen the collective practice of ILRI with group facilitation. It remains difficult to show exactly how this training course has been put to use to improve ILRI staff work, but the feedback on this course has been uniformly positive. 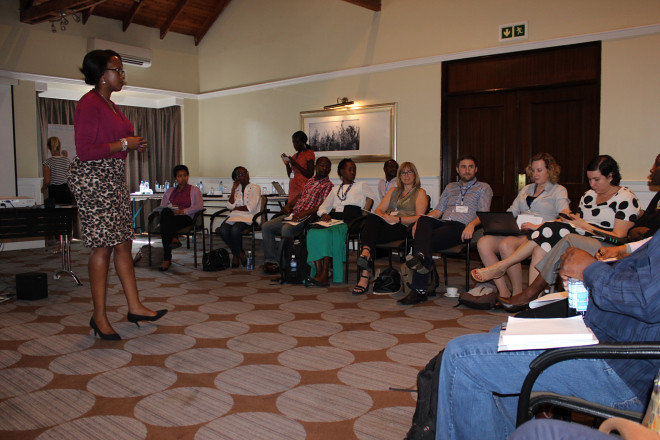 ILRI’s Muthoni U Njiru facilitating a session during the ResUp Meet Up Exchange in Nairobi (photo credit: ILRI)